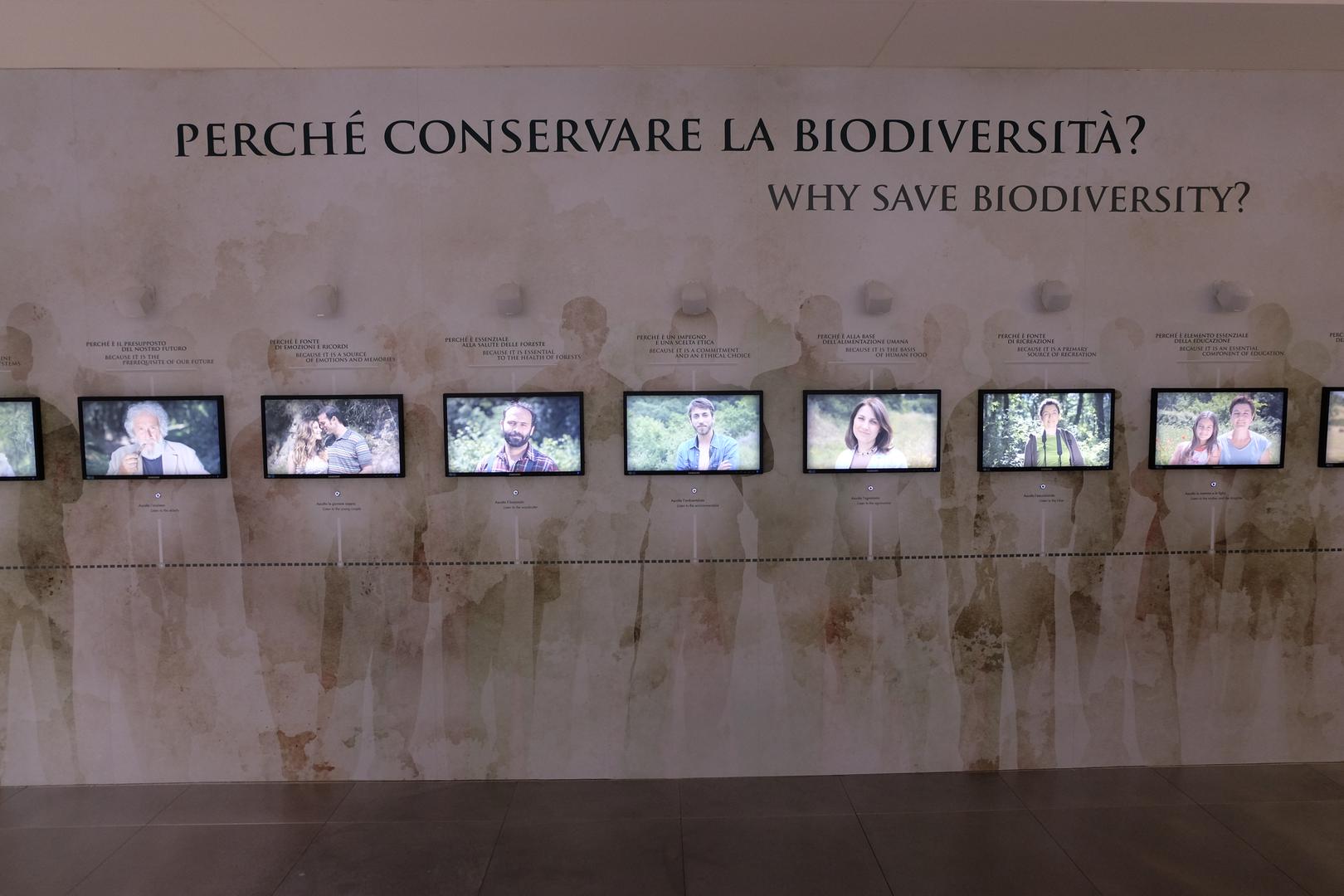 What is biodiversity? Where is it? Because it is important?

In the first part of the exhibition, the museum answers these fundamental questions, dedicating a room with panels, interactive multimedia stations and films to each theme.

First room - Biodiversity of the Province of Siena

A rich composition of images of flora and fauna of the province of Siena welcomes those who enter into the first room: under the glass floor the different types of soil of the territory are visible, while a multi-projection on the ceiling shows the day-night cycle, synchronized with sounds of the environment. A short nature documentary and 5 interactive multimedia, accessible through touch buttons.

Second room - Where biodiversity is found

A series of thematic panels presents the places of biodiversity with simple texts and infographics. Two interactive multimedia allow to deepen the topic, while 8 naturalistic films on a large videowall compare different natural environments.

Third room - What biodiversity is for

What are mosquitoes for? What about the ground we walk on? And again: how have the living species evolved? Panels and animations explain otherwise difficult concepts in simple terms. Two interactive multimedia and games allow you to deepen the topics.

High-impact videos and panels with infographics show the worrying scenario of the loss of living species on earth, too often caused by man and his activities.

Fifth room - Why preserve and how

Why preserve biodiversity? Nine people, each representing a role or profession, answer this question through short interviews. Also in this case, panels, films, animations and interactive in-depth stations help to understand what can be done and how.

Nature reserves are one of the most important tools for biodiversity conservation. Through animations, video interviews and infographics, the great benefits but also the limits are shown. A large push-button panel corresponding to specific places on the reproduction of the planisphere also allows you to start extraordinary nature documentaries on some of the most important nature reserves in the world.

The nature reserves of the Province of Siena

Moving to the upper floor of the museum it will be possible to discover the richness of the Sienese territory. Each of the 14 provincial reserves is represented by a dedicated space where you can learn about the single territories through videos, graphic panels and interactive educational multimedia. For example, you can listen to the sounds emitted by animals of the reserve or use a monitor as a magnifying glass to discover hidden details.

In the center of the room a large model reproduces the territory of the Province of Siena: through a touchpad it will be possible to illuminate specific locations and display the related biodiversity data on a large monitor.

The exhibition is completed by a projection room with 30 seats, showing thematic documentaries on the Sienese territory.